When Bob’s back legs became paralyzed, his owners Rachel and Patrick Huveldt thought a $10,000 surgery was the only answer to helping their 14-yearold chihuahua.

“I took him to [Thompson] and he didn’t say he could fix [Bob]; he said, ‘Let’s have a look at him,’” Rachel Huveldt said. “He brought out what I thought was a laser, but he said, ‘No, it’s light therapy.’ He started the treatment and within a couple of treatments Bob was walking again.” 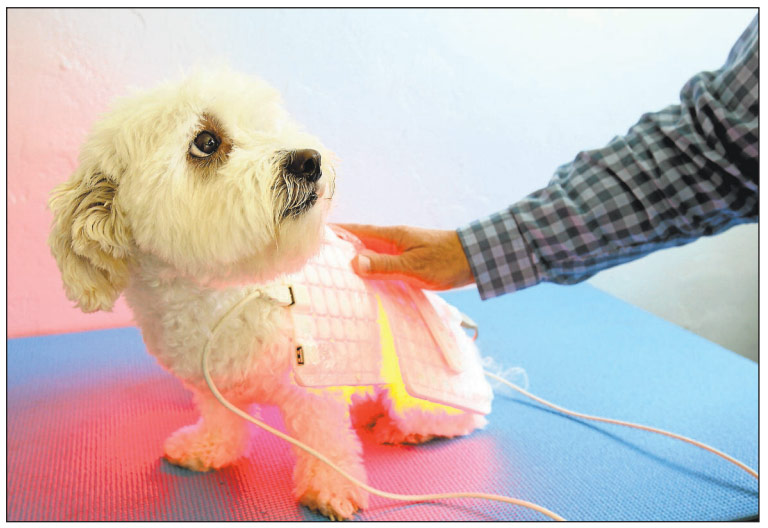 Bob was treated with PetLight, a technology that uses LED-based phototherapy to help pets with pain, paralysis, skin conditions and nerve and autoimmune disorders, among other ailments.

Roughly 30 pets a week come to PetLight Therapy Center in Cupertino for treatment. The clinic opened in April.

The technology was developed as a collaboration between company CEO Richard Williams and president Dan Schell. Dr. Erin Campbell runs the clinic in Cupertino.

When pets come in, they are led to a room with their owners, where they lie down and a pad is placed on the area of focus, then light is pulsed on the area for about 10 minutes.

“The way this works, it’s at a cellular level and it’s about getting control of the mitochondria to make it work right—make that cell generate ATP, which it won’t do if that cell gets damaged or if it gets old,” Schell said.

ATP stands for adenosine triphosphate, a molecule that stores and supplies cells with energy.

The LED therapy technology came to fruition in 2012, but Schell had been working on it since 2001.

Schell said he has treated animals of all sizes, including chinchillas and ducks.

The treatment is non-invasive and painless and offers a cheaper alternative to surgery and medication at $50 per session.

“If [the health problem] is something with soft tissue or nerve or circulatory system, then we can be the primary mechanism of repair,” Williams said. “It’s been reported in many, many journals that LED based phototherapy can regrow new nerves and arteries and remove scar tissue and remove dead cells [by] speeding up natural metabolic processes.”

Joy, a 9-year-old Rhodesian ridgeback, and her owner Jennifer Underwood came to PetLight after running out of options.

The dog “was diagnosed with autoimmune thrombocytopenia, where blood platelets get too low so they can bruise and bleed out they can die,” Underwood said. “It got to the point where it was really bad.”

Underwood said Joy had stopped eating after going through several rounds of chemotherapy and medication. 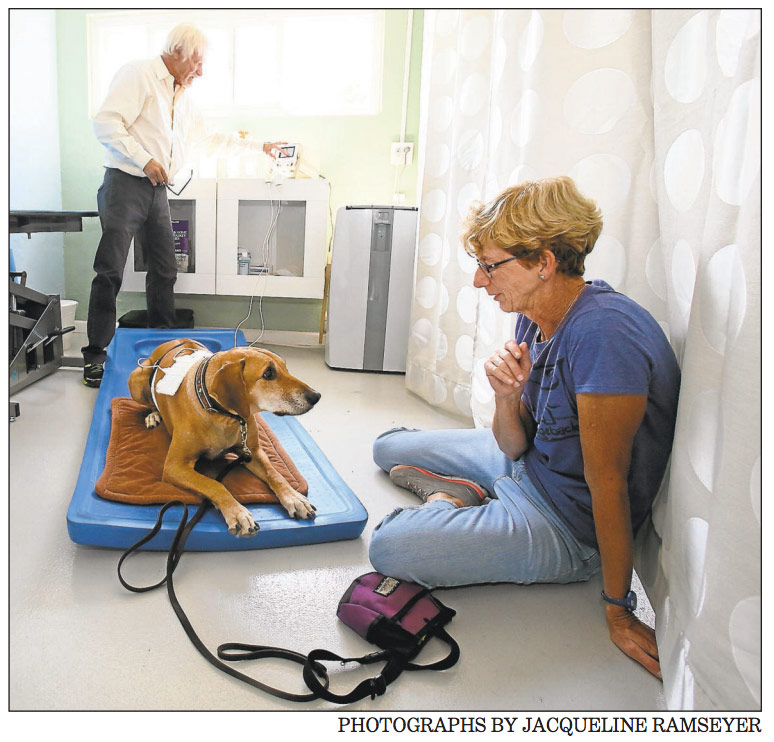 Underwood heard about PetLight through a friend and took Joy in for treatment.

“One thing I noticed is that because of the medication, I didn’t have my dog; she was depressed and lethargic,” she said. “And this is a dog that even at 9 is quite energetic and has an attitude, and after one treatment, I felt like I finally got my Joy back.”

Joy has continued weekly treatments and is back to competing in agility events, Underwood said.

“What we’ve found is that once you fix the underlying problem, as long as they don’t go back to the injurious activity that promoted it in the first place, it won’t return,” Thompson said. “We’ve treated a lot of paralyzed animals that were slated for surgery that within a few visits, we got them out of it.”

The same LED-based phototherapy is also used on horses and humans, respectively called EquineLight and LightMD.

“It doesn’t matter if its your big toe or your brain, [the therapy] is still going to try and repair that tissue,” Schell said.

The therapy is used far and wide on racehorses and even camels.

“We really started with horses in Dubai,” Schell said. “We’re in the two biggest hospitals in Dubai for humans. Now we’re in every stable in Dubai. We can do big things with horses that nobody else can do in time frames that no one else can do them in.”

PetLight Therapy Center is located at 21686 Stevens Creek Blvd. A new PetLight location is planned to open in Santa Rosa in October.

PetLight Therapy Center
4.9
Based on 15 reviews

review us on
See All Reviews