Bombardeo – A Racehorse’s Quest to Healing

If your pet is experiencing pain, having trouble walking, or recovering from injury or surgery, PetLight™ therapy can change their lives.

PetLight™ therapy is advanced technology that has provided transformative results for dogs, cats, and horses with limping/lameness issues, neck/back pain, or weakness/ wobbliness of the hind end. PetLight™ is the veterinary version of FDA approved LightMD™ which is used in hospitals and clinics around the world.PetLight™ also treats sprains, muscle strains, nerve disorders, disc and hip problems, auto-immune disorders, and more. EquineLight is the same technology and has been used successfully since 2015.

Last January, after placing in 3 of his first 5 races (two 1st place and one 3rd place finish), Bombardeo was injured. After his injury, his health began to decline further. He had a fractured front right knee, poor body condition, low energy, ulcers, neck stiffness, and digestive/absorption issues.

Due to the demands of the racing industry it’s not uncommon for such horses to continue training and racing. Prescription drugs and medications are often used to support the equine athlete’s performance, however, they may mask symptoms of larger problems and eventually lead to greater injuries.

Some of these approved drugs are “performance enhancing” and may be used to
support a horse in a race when he is not in optimal condition; which sets the stage for further physical and emotional damage.

Bombardeo running for the first time in four months after recovering from a fractured knee.

Another video of Bombardeo running for the first time in four months after recovering from a fractured knee.

Another video of Bombardeo running and having an amazing time. Pure joy. 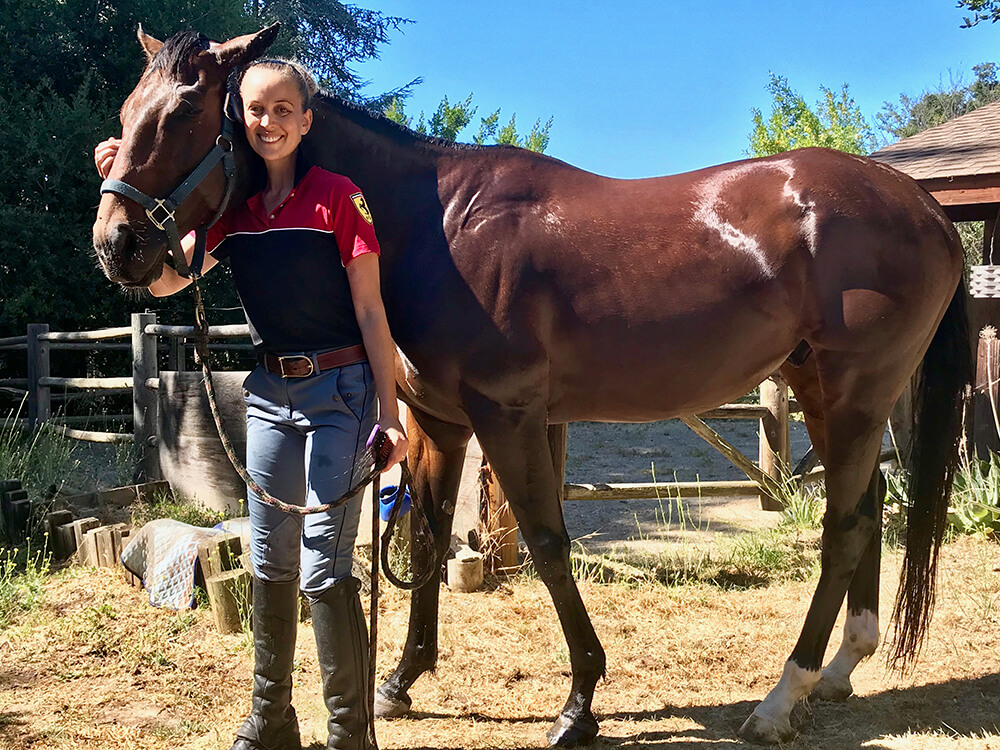 Enter Kristina Chancholo, owner of Equi Kneads in Woodside. She has been working with horses for over 25 years and has a degree in Equine Science from Fresno State University. She joined the EquineLight team in 2015 and has been instrumental in the rehabilitation of countless horses. Like our team, she treats the animal’s physical and emotional injuries, ushering in a more complete recovery process.

She began treating Bombardeo with EquineLight last February. At first, he was
skittish and unsure. According to Kristina, “He didn’t even want to walk, much less gallop. But, once we got a hold of him, we started noticing a marked improvement almost instantly. Now, with just a little nudge, it’s almost as if he wants to show off!”

On April 29th, x-rays of Bomb’s once fractured knee cleared him to begin the post injury-conditioning program. He is back on the track and he will soon be back in racing shape. Stay tuned to hear more about Bombardeo and his return to the racing world!

Throughout the course of his treatment veterinarians have continuously evaluated Bombardeo. His veterinarian advisory board indicated all of his conditions are improving and his coat color and integrity had improved and so had his demeanor. His owner, Dan Schell, told us “the only way we will take him to the track is if he is running free, meaning free of injury and past trauma. He needs to be mentally, emotionally, and physically in sync with his body. That means no Lasix (duretic), painkillers, or drugs on board.” 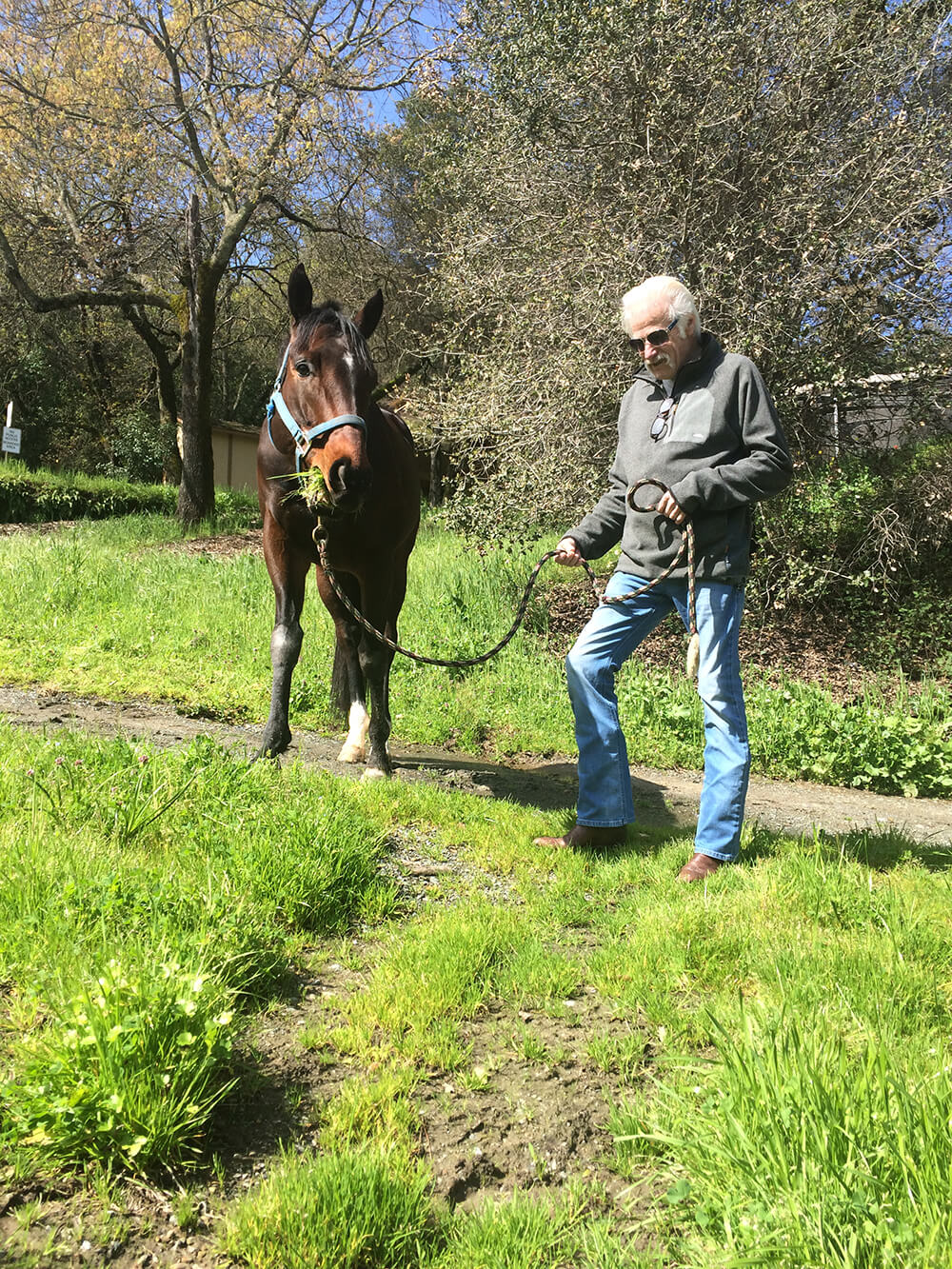 Thousands of studies to date prove that living cells can absorb light in the red and near infrared spectrum and the mitochondria convert these wavelengths into usable energy. This reaction produces a dramatic increase in cellular metabolism, which drives the appropriate healing response and reduces post surgical recovery time significantly. Like humans, our pets incur macro and recurring microtraumas. Injuries can be slow or impossible to heal, becoming chronic with time and age. Suddenly your pet is coming up lame, or arching their back unnaturally, or walking more slowly and lagging behind, or dragging their toenails, or no longer wanting to play.

Our comprehensive treatment addresses the whole animal, physically and emotionally. When you bring your companion to PetLight™ Therapy Center in Cupertino, they are first gently examined to determine the source of their suffering. Next our doctors will explain what is causing your pet’s condition. If they are a good candidate for PetLight™ Therapy, with your permission, the gentle painless session will begin. The PetLight™ Therapy unit is programmed for your Pet’s particular condition and the Light Pads are placed or wrapped around the area of focus. Deeply penetrating, yet very soothing light is pulsed for 20 to 30 minutes. The application causes many pets to sleep through the treatment. Enter “PetLight™ Therapy Center” into Yelp.com to see what others say about our treatments.

What To Do Next